A group called Voices of Sheldon Jackson School and College will dedicate several new interpretive signs detailing the history of the school at 1 p.m. on Saturday, Dec. 28, at the corner of Lincoln Street and College Drive (across the parking lot from the old Stratton Library and Sheldon Jackson Museum).

The project began as a way to document the history of the closed school while there were still people around who attended or taught at the school. There are four main signs on Lincoln Street (two by the Youth Advocates of Sitka building and two at the campus entrance of Lincoln Street and College Drive), two signs behind the Laundry Building (across from museum), one in front of the Sitka Youth Hostel on Jeff Davis Street, and one by the old sawmill building (next to Sitka Sound Science Center). You can see images of the signs at this link.

There will be a short dedication ceremony at 1 p.m. on Saturday, Dec. 28, and the public is invited to a short dedication for new interpretive signs about the history of Sheldon Jackson School and College. The dedication will be at the new signs at the corner of Lincoln Street and College Drive. A reception with coffee, tea and cookies will follow at the Laundry Building (also known as “Smoke Stack”), on College Drive, across from the Sheldon Jackson Museum. A new website dedicated to the school’s history is being built at http://www.sjvoices.org/.

This project was made possible with the participation of graduates, former staff and other historians and experts on Sheldon Jackson history, and by the Alaska Humanities Forum, the Rasmuson Foundation, and the Sitka Fine Arts Camp. For more information, call Rebecca Poulson at 738-7448. 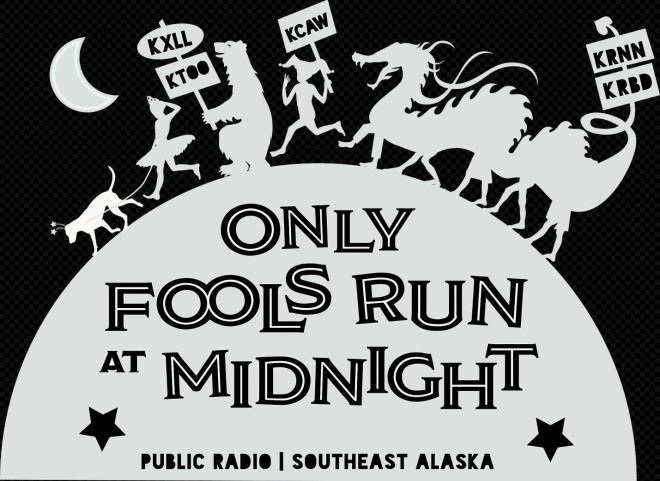 Mark your calendars! Sitka’s wildest running event, the 14th annual Only Fools Run at Midnight, is coming up at 11:59 p.m. on Saturday, June 24, with a brand new course. The race starts and finishes at Harrigan Centennial Hall and follows the Sitka Sea Walk (so no roads to cross, making it safer at night). KCAW-Raven Radio is delighted to bring you this costume-clad evening full of family fun and prizes.

Registration info and race details are available at kcaw.org, and the entry fee is $20 ($25 the night of the race). Prizes will be awarded for fastest finishers, best costumes, and wackiest centipede (five or more people attached in some form or fashion). Creativity is encouraged.

There are t-shirts for the first 200 to register, and lots of entertainment and fun to keep folks wide awake for the midnight run. Funky pre-race entertainment will be provided by the Sitka Fine Arts Camp staff.

For questions and more information, visit www.kcaw.org or contact Ken or Rachel Fate at 747-5877 or send email to foolsrun@kcaw.org.

There also will be an open house and reception from 1-4 p.m. Oct. 15 at Whitmore Hall with coffee and cookies, information about the preservation work, and historic photos, blueprints, and possibly artifacts.

In addition, from 7-8 p.m. on Thursday, Oct. 20, at the Del Shirley Room (upstairs in Allen Hall), James Poulson will give a presentation on “World of Magic and Miracles – the Architecture of Ludlow and Peabody.” Ludlow and Peabody was the nationally prominent firm that designed the Sheldon Jackson School campus in 1911. Learn about these men and their circle, and how these unusual buildings were once on the cutting edge of American arts and culture.

For more information about these events, go to the Historic Preservation Sitka website at https://historicpreservationsitka.wordpress.com/.

Visitors to the Sitka Fine Arts Camp may have noticed the new walkways and landscaping around Odess Theater and Allen Hall this summer.

The new walkways were built thanks to the support of Carol Odess and other donors, according to Sitka Fine Arts Camp Director Roger Schmidt, and they make the Odess Theater and Allen Hall buildings more accessible. The new landscaping was designed by Sitka architect Monique Anderson using the 1910 architect’s plan for the Sheldon Jackson College campus.

The project started this winter, and concrete was poured in April for the new walkways. During the 100 Volunteers Day at the end of April, volunteers helped with the landscaping, planting flowers, shrubs and even some strawberries along the walkways.

“Of course there is still a lot of work to do on campus,” Anderson said. “A future project will be realigning the quad walkways to the historical road alignment. The Sitka Sea Walk spur to Lincoln Street was positioned to line up with this future alignment. Sitka Fine Arts Camp will be seeking donors for this work.”

Click this link to see the design and reasoning for the project. A slideshow of scenes from the construction, with Carol Odess in one of the photos, (courtesy of the Sitka Fine Arts Camp) is posted below.

DANCING IN THE STREET – New Archangel Dancers Stacey Woolsey and Angela McGraw dance arm-in-arm this morning in front of St. Michael’s Cathedral. Two blocks of central Lincoln Street were closed to vehicles from 8 a.m. to 4 p.m. today as part of an experiment to make the town more attractive and safer for tourists. The closure allowed street vendors to fill the space and non-profits such as the dancers to perform. Lincoln Street from in front of Ben Franklin to Barracks Street will again be blocked off June 19 and 26 and July 3. (Daily Sitka Sentinel Photo by James Poulson, http://sitkasentinel.com/7/images/frontpageimage/naddowntownws.jpg)

Two blocks of downtown Sitka were closed off to cars on Wednesday, June 12, to allow tourists and locals to shop and enjoy the downtown. This is the first of four straight Wednesdays (June 12, 19, 26 and July 3) where the streets will be open to pedestrians and bikers from 8 a.m. to 4 p.m. as an experiment being tried by the Sitka Downtown Revitalization and Walk Sitka projects that came out of the 2012 Sitka Health Summit.

Closing off downtown streets to traffic and opening them up to walkers, bikers and play is a concept being tried in many communities around the country. Called Open Streets, the basic premise is a local street festival designed to draw people downtown where they can shop, be entertained and interact with their neighbors. Open Streets events also can be farmers markets, arts/music festivals and more.

This isn’t the first time Sitka has closed off downtown streets to traffic and opened them up for walkers and bikers, but previous closures usually were tied to special events such as the End Of Season Celebration/Running of the Boots race or parades. There also have been occasional sidewalk sales or trick-or-treating events that saw downtown streets opened for pedestrians.

Cyndy Gibson organized Wednesday’s pedestrian mall for the Sitka Downtown Revitalization project, and she made this comment in a KCAW-Raven Radio story aired Wednesday night:

For a couple of reasons. One is to encourage more time in the downtown area, and more shopping. When you have more of a unique one-of-a-kind experience when you’re traveling, you’re more inclined to maybe shop for something a little more expensive, or a little more meaningful.

Future Open Streets events in Sitka will feature musicians from the Sitka Summer Music Festival and the Sitka Fine Arts Camp, as well as other entertainment.

This website has been updated and maintained on a volunteer basis for the past decade by Charles Bingham. Click the image below if you want to help keep this website operating.